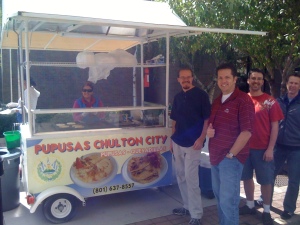 A few weeks ago I received an important and urgent message from taco enthusiast GURTHY.  Since he and I both work in the downtown area and he knows of my love of tacos he sent me an IM that there was a new taco stand located on the corner of the 300 S and Main.  I promised Gurthy I would check out the stand and report back.  Jon, consider this your attention.

A few of us walked over from work to report on this new “taco” stand.  We were immediately surprised to find PUPUSAS instead.

GURTHY INITIAL REPORT : Don’t be alarmed, but this is not a taco stand

GURTHY SECOND REPORT : Although this site is titled slcTACOS.com, this review will go on, because I love pupusas and their birthplace is as close to Mexico as you get.

What is a pupusa? I suppose now would be a good time to talk about their deliciousness.  A pupusa is a wonderful treat which comes to us from El Salvador.  However, instead of using a thin tortilla like our amigos mexicanos, these salvadorenos use maize flour dough to create a thick flat bread which they will with all sorts of things like cheese, pork, chicken and many others.  The best way I have found to describe pupusas to most people is that they are a lot like a mexican gordita but their bread is much thicker. 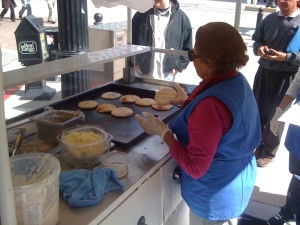 A pupusa is born in this visual example of how maize flour dough is transformed into a pupusa.

After relating this information to my taco compatriots, we started right away and I ordered three pupusas : cheese, chicken and pork.  After ordering I asked the owners how long they had been open.  At the time of writing, this familia salvadorena has been open for about 2 months and they report that business has been very good so far.  The name of the stand they tells me comes from their hometown in El Salvador.  I did a bit of searching on the electric internet and so far have not been able to find anything about the city or find it on a map.

Pupusas at the stand run $1.50 a piece and usually 2 or 3 will be more than enough for a meal.  Add a bit of cabbage and salsa and you’re in business for a great meal on the hustling and bustling streets of downtown Salt Lake City. 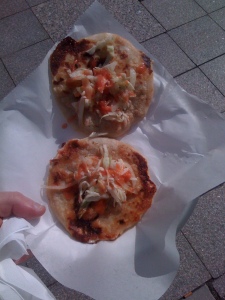 A quick little snapshot of two of the pupusas I found a home for.

After our meal, I asked our otherwise band of tacovores what they thought of the meal and they had already made up their minds to come back.  We exchanged a few laughs with the owners of the stand who were thrilled to be causing the beginning of 5 new pupusa careers and we promised to come back soon.

GURTHY FINAL REPORT : So that’s a pupusa and it’s a block from your work.  Are you man enough to try one?