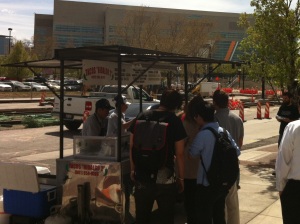 Hidalgo 2 near the Energy Solutions arena and The Depot

The wind was angry mis amigos.  Nearly as angry as members of our taco army who have written me angry emails due to the lack of taco reviews on slctacos.com over the last year.  This wind was so angry that it almost blew away the tacos we tried to eat in creating this review.  The fact that you are reading this now means that we did not die and the tacos ended up in our mouths.  As a strong group of 6 taco enthusiasts, we have just experienced the tacos from Hidalgo II located on 400 W between The Depot and Energy Solutions arena directly in front of the office building on the North end of the Gateway.

Having heard from several co-workers about the tacos at Hidalgo II and the long lines to acquire them, we arrived to find a sizable queue consisting of construction workers and office folk.  We were not disappointed and this is definitely a taco stand that I would recommend to one and all.  Since there are some new readers who may be reading this review at Ugly Magazine rather than on slctacos.com, let me say that this one of the first things I look for in suggesting taco stands to taco newbies is to watch how food is prepared and how money is handled.  On both accounts Hidalgo II scores high marks since they keep their grill and cooking area clean and they have a separate gentleman to handle the dollars.  So the place is clean and this keeps the line moving.  But enough about this, let’s get to the tacos.

Among our army of enthusiasts, we tried the tacos and a couple of the burritos.  Tacos are $1, Burritos are $4 and Quesadillas are $3.  I personally tried the 4 tacos offered so I will review them each individually :

Clockwise from the upper left we have : Carnitas, Asada, Pollo, Al Pastor

I always measure a taco cart by the quality of its al pastor which was exceptional with a fantastic marinade with just the right amount of spice, but I was surprised by the carne asada.  I’m usually not a fan of beef at most taco stands but I will definitely be returning to order a couple more of the carne asada tacos.  The meat is perfectly cooked since the cook at Hidalgo II is precise and lightning fast.  There is such a line there every day at lunch that he is forced to move at superhuman speeds.  During this flurry of taco duty, the chavo was still able to talk to me a bit about the stand and told me he was excited about the revista I am currently writing.  His recommendation was that everyone should try the carne asada at the stand since he is particularly proud of it and he says the local construction workers love it.

After snagging my tacos, a horrible viento rushed upon me out of nowhere which attempted to blow my tacos all over 4th West.  The review could have ended there.  Instead, this was the moment I met Nicolas who rushed up and helped me cover the precious tacos with tin foil as soon as I had my toppings.  Nicolas did not initially believe me that I work as a taco journalist but after a few questions he realized that I mean serious taco business and he was happy to answer questions about the stand he runs with fellow amigos from Hidalgo, Mexico.

Talking to Nicolas about the construction and his home of Hidalgo, Mexico

He told me that as in all parts of Mexico, methods and materials for building delicious tacos are different and he is excited to share his tacos in the style of his home state Hidalgo.  Hidalgo II has been open for 9 months now and Hidalgo I would be 3 years old but it recently closed due to the fact that 4th West is torn to shreds from construction.  When the construction is over, Nicolas says that both will be open since they have a large number of visitors every day.

We wished we could stay to talk to Nicolas a bit longer, but the wind did not allow it.  Even with tin foil guarding our delicious cargo, we were forced to retreat to our taco fortress (work) where we could eat.  Some of us could wait, but the anticipation was nearly overwhelming.  As you can see from the photos, some of us started eating along the walk.  When we finally were able to give the tacos a proper prueba we all agreed that Hidalgo II would enter regular rotation so we will be seeing you there when we show up for lunch. 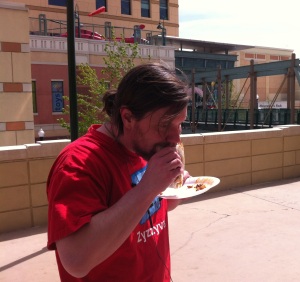 Taco enthusiast Mike could not wait and started eating as we walked through the Gateway. The wind tried to steal his burrito but Mike would not let the wind steal it.

As a final note, I must mention that the anticipation and wind intensity were factored into the final review score for this taco stand.  This did make our taco adventure more exciting and it did enhance the flavor, so the review score was slightly reduced so that the true quality could be reflected without being influenced by the wind which nearly killed us and stole our tacos.

Stay tuned for the next taco review and I’ll see you at the taco stands!